“The Camera Doesn’t Lie but Photographers do?” Presented by Graham Dean.

Graham Dean our speaker for the evening began his talk, with a quote saying the following: “When you open your eyes do you see the world as it really is.”

He titled this section of the talk “Seeing is believing.” He continued by showing us several images and we were asked what colours we saw. For example, images of trainers some people saw as pink and white and others saw them as green and blue. This illustrated that people do not all see the same colours.

Graham continued to show us an image by Niepce which was the very first image known dated 1816.He also showed us Fox Talbert’s image called “Laycock Abbey” 1839 and a composite called “Self Portrait of a drowned man.”

He went on with a well-known photograph titled “When the day is done” of an elderly man and woman sitting in their cottage which was a composite made up of six different negatives by Peach Robinson.1830-1901. Graham explained that photographic manipulation had been taking place since the 1800’s

Graham said manipulation of photographs is usually done for two reasons, Political propaganda or Art.  It can be carried out by a particular viewpoint which throws a different meaning on to a photograph which is sometimes used by newspapers to put a slant on a story. An example of this was shown with a photograph of the police and a miner during the Miner’s Strike. The image looked menacing whereas a similar image taken from a different viewpoint looked quite friendly.

We looked at some manipulation that had been carried out on famous magazine images, cigarettes removed from Beatles posters, Bill Wyman air brushed from a Rolling Stones picture after he left the band , and Goebbels who was removed from a picture with Hitler after he fell out of favour with Hitler. Even the Egyptian pyramids had been moved closer together on the front of the National Geographical Magazine to make a better composition. Graham gave us a website which demonstrated how artists have used manipulation and collage. This can be found on his website.

Man Ray and Hannah Hoch are just two artists seen on this site.

This bought us to a discussion as to what is acceptable and what is not.

Questions were raised about the amount of manipulation carried out on photographs and composites and reasons behind that manipulation, and a discussion followed during tea break.

Graham continued after tea-break with a selection of his images with which he had carried out various post processing enhancements, explaining what he had changed why and how he had carried these out. He was honest, explaining some critiques he had received from judges in competitions and how well images had done. He explained how he added a moving train to a station, in the “Train  now departing,” because the train wasn’t there ,and how he had  removed some flowers and a person from a picture titled “Vikings Confrontation.”

Two of his images featured here show a composite of clocks he has photographed from different places and an idea he had for an image after seeing film where Hugh Grant wanders through the same streets as the seasons change. Graham had taken a photograph of his local church and churchyard changing the seasons across the image.

The evening raised some interesting questions and was delivered in a thoughtful and very entertaining way . 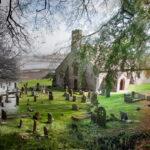 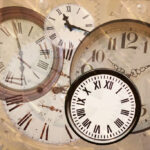 Next week: COMPETITION: Winner on the Night #2